What People are Saying!

"Ocean Odyssey 3D has proven to be a hit with our visitors beyond what we could have hoped for."

"We surveyed Ocean Odyssey to our team and it scored 10 out of 10. Everyone loved It!" 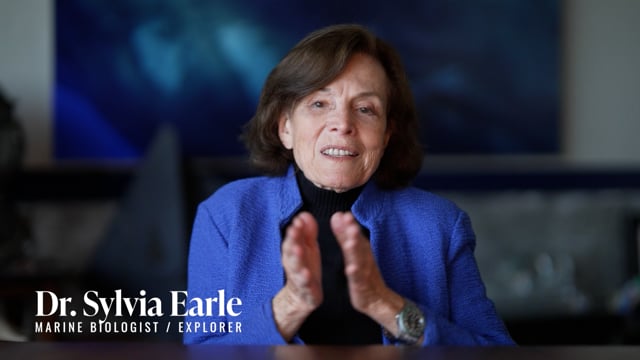 We are grateful to have Sylvia Earle as host-narrator in Ocean Odyssey. Here is a glowing endorsement from Earle herself!

An Official Selection at the Wildlife Conservation Film Fest!

We are proud to announce that Ocean Odyssey is now an official selection for the 2021 Wildlife Conservation Film Festival, being held in...
CLICK HERE FOR MORE NEWS & UPDATES
About

Follow a three-month-old baby whale on a magical journey down one of the Earth’s great ocean highways to discover the incredible world of ocean currents. She will never know it, but as she swims with the flow of the current, her story becomes inexorably connected to our own.

Ocean currents are hidden marine rivers that flow around the Earth. They are responsible for the fish we eat, the rain that feeds our crops, the snow that covers our mountains - even the air we breathe, and they have been helping to keep the temperature of our planet just right for life for millions of years.

As our young whale goes with the flow of the current on a great migration from the warm tropics to the frozen ice floes of Antarctica, she meets the curious creatures that call the current home.

From a baby clownfish that has just hatched out of his egg on a reef, to playful fur seals, and even some organisms so tiny that they can’t be seen with the naked eye. And each of these creatures has their own part to play in the ocean’s story.

She will also discover the darker side of ocean currents - for when humans discard their plastic waste on land, ocean currents carry them far and wide across the globe. On a remote island, plastic waste from our cities ends up in the stomachs of young seabirds, creating a crisis that few humans will ever see, but that only we can avert.

As our whale approaches her Antarctic home, she is witness to devastating changes in marine environments brought on by a warming ocean and we learn how changing ocean currents could affect us for generations to come.

Jump in the flow of this immersive giant screen 3D adventure and discover how the ocean nurtures all life on earth, from the smallest fish...to us.

Nick Robinson began his career as a marine biologist but soon found a path into documentary filmmaking. Nick’s vision as a documentary writer, director and cinematographer is driven by his passion for our natural world. His films have taken out the top prize at several international festivals and he has won three AACTA awards for Best Cinematography in a Documentary. In 2015 Nick founded Wild Pacific Media - a production company that specialises in creating blue-chip long form documentary films that engage audiences in our natural world and encourage stewardship of our planet. His multi-award-winning team have produced several critically acclaimed 3D IMAX films, all aimed at inspiring people to learn about and care for our beautiful planet. Nick has directed several natural history series for ABC Television, including Kakadu (2012), Life on the Reef (2015) and  Australia’s Ocean Odyssey – A journey down the East Australian Current (2020). Most recently, Nick directed Australia’s first Netflix Original documentary, Puff: Wonders of the Reef.

Three time AACTA award-winning and Emmy nominated cinematographer Jon Shaw, founder of ginclearfilm, specialises in underwater cinematography and has had a passion for the ocean and environment from an early age.  From his beginnings as a marine biologist and commercial diver, Jon has developed an enviable career travelling the world to film astonishing wildlife both above and below the ocean’s surface.

Jon is passionate about arresting the perils that face the ongoing sustainability of the world’s oceans. “Coral bleaching, dwindling shark numbers and the outcome of today’s overuse and disposal of plastics in our environment are issues I witness repeatedly through my work.  I want to be able to take those issues to the people through film”, Jon Shaw said.

Jon’s love for using the most advanced filming technology allows the audience a seemingly real-life glance into the environments he captures on film.

Electra Manikakis has a career in television spanning over 30 years, from news and current affairs, live outside broadcasts to award winning high-end documentary series. Her documentary credits include the 3-part Documentary series Ocean Odyssey (ABC/ARTE), the IMAX films “Australia – The Wild Top End” and “Ocean Odyssey 3D”, as well as the television series Life on the Reef (ABC/PBS), Kakadu  (ABC/NGC), Secret Life of Pearls (NGC), Massai Warriors (NGC), Disable Bodied Sailors (SBS), Megafactories (NGC) and the NITV/SBS feature documentary In My Own Words.

Electra’s repertoire also embraces the spoken word – she voices promos, TV and Radio advertisements/corporates and has narrated many documentaries.

Peta Ayers specialises in the production of high end long-form documentary. She has attended the "Hair Olympics" for The Pursuit of Excellence (PBS, ABC); got up close and personal with invasive species for Cane Toads: The Conquest (Participant Media, National Geographic, premiered Sundance Film Festival 2010); spent time in the wilderness for the production of Kakadu and Life on the Reef, both multi-award winning blue chip natural history documentary series for ABC & PBS; and earned an AACTA Award nomination for her work on the theatrical biopic Whiteley. Peta joined Wild Pacific Media in 2017 and has since been producing documentaries both for television and the giant screen. In 2020 She produced and co-wrote the three-part blue-chip series and audience favourite Australia’s Ocean Odyssey (ABC, ARTE, MGM) and, most recently, produced and co-wrote Australia’s first Netflix Original documentary, Puff: Wonders of the Reef.

Be sure to follow us on our socials to stay up-to-date on theater releases, festival announcements, press and other news & updates on Ocean Odyssey.